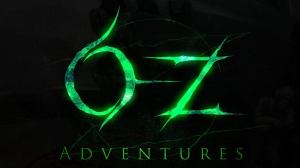 American McGee Reveals Oz: Adventures, a Hybrid TV And Video Game Project Doom, Quake and Alice alum American McGee has revealed Oz: Adventures, a television series and video game project that has been picked up for development by Radar Pictures. The project is based on the Oz series of books, which began with The Wonderful Wizard of Oz. McGee said on Instagram that he and his team “will be working to develop the Oz: Adventures concept for production as a TV series and video game. With luck, you’ll soon turn on one of your content providers (HBO? Netflix? Amazon?) and find ‘OZ: Adventures’ (Game and TV show) among your entertainment options,” McGee continues. McGee describes his version of Oz as “Running Man vs. Witches, Quadlings, and Munchkins. Characters are involuntarily pulled into Oz from all over the world and all through time.”

JoJo’s Bizarre Adventure Art Creates Strange Wizard of Oz Crossover The world of the Joestars is a strange one on its own, with JoJo’s Bizarre Adventure giving us some of the weirdest battles in the history of anime thanks to the Stands that appear frequently in the franchise, but one fan has decided to amplify the level of the bizarre by bringing the Hirohiko Araki characters into the world of The Wizard of Oz. This year is promising to be a big one for the anime franchise that continues to pick up steam across the world with each passing year and the future of the series seems bright.

What Song Is In The Army Of The Dead Trailer Among the flailing bodies and flying bullets, a timeless voice rises above the chaos. The Army of the Dead trailer is set to a slightly rejigged, slowed-down version of Judy Garland’s “Lucky Day.” The song was written in 1926 and recorded by various artists including Harry Richman and The Revelers, but perhaps the most famous performance (and the one Zack Snyder uses here) is Garland’s, first recorded in 1956.

Tell Me Something Good: ‘Finding Dorothy’ “Finding Dorothy” has been chosen as this year’s selection for the “Central New York Reads One Book” campaign, urging readers to read the book over the next few weeks and talk about it.  That’s something that really touched the author. “When you say that, I’m getting goosebumps,” Letts says.  “To have the community that I, as an outsider, came in and described a piece of, embracing my story and saying, hey we think you did a good job, that is incredibly validating for me.” As part of “Central New York Reads One Book,” Syracuse Stage will host Elizabeth Letts for a live Zoom conversation, next Thursday, March 4.  There’s no charge to participate, and you don’t have to have read the book.  But you do have to register in advance to get the Zoom link.  You can do that at https://www.syracusestage.org/syracusestories.php   And you can learn more about “Central New York Reads One Book” at https://www.cnyreads.org/.

A Los Angeles Home With Some ‘Wicked’ Hollywood History Hits the Market A historic Los Angeles home that once belonged to Margaret Hamilton, known as the Wicked Witch of the West in the 1939 classic “The Wizard of Oz,” was listed last week for $2.4 million. With three bedrooms and three-and-a-half bathrooms over about 3,000 square feet, the townhouse is the largest of the five residences in the Courtney Villa complex on the Sunset Strip, according to listing agent Jill Galloway at Compass. The residence is one of five homes that make up the Courtney Desmond Estate, a Spanish-Mediterranean revival-style community that dates to 1926. Designed by architects Frank H. Harding and George J. Adams, it was declared a Los Angeles Historic Cultural Monument in 1989. 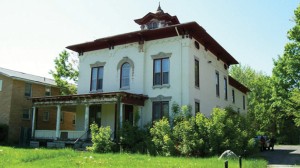 Fabled ‘Oz House’ in Syracuse sells for $10,000 It’s nicknamed the ‘Oz House’ because it was rumored that ‘Wizard of Oz’ author L. Frank Baum met his wife Maud Gage at the home. That was later debunked (the home where he met Gage has been demolished). The 5,198 sq. ft. home is on Onondaga St. W. and was built in the mid-1800s. In 2015, Greater Syracuse Land Bank sold the home to the “All Things Oz Historical Foundation.” A spokesperson said the Land Bank oversees sales to make sure buyers follow through with rehabbing the properties. After two years, the spokesperson says “All Things Oz” hadn’t done any work so the Land Bank put it back on the market in May 2018. A woman from downstate New York purchased the home and plans to make it her primary residence.

‘Wizard of Oz’ remake planned with ‘Watchmen’ director New Line Cinema is making a new adaptation of “The Wonderful Wizard of Oz,” L. Frank Baum children’s novel, with Nicole Kassell, the visual architect of “Watchmen,” set to direct. Baum’s 1900 novel, now in the public domain, has spawned many adaptations over the years — most famously, of course, the 1939 MGM musical by Victor Fleming and starring Judy Garland. Kassell’s version will not be a musical. New Line said it will be a “fresh take” and a “reimagining” of “The Wonderful Wizard of Oz.” It will have some advantages, too, since Warner Bros. owns New Line and the 1939 film. That means it can use some trademarked elements like the ruby slippers. “While the 1939 musical is part of my DNA, I am exhilarated and humbled by the responsibility of re-imagining such a legendary tale,” said Kassell in a statement. “The opportunity to examine the original themes — the quest for courage, love, wisdom and home — feels more timely and urgent than ever. These are profoundly iconic shoes to fill, and I am eager to dance alongside these heroes of my childhood as we pave a newly minted yellow brick road!”

Animal Logic Reteams With Warner Bros. on Animated ‘Toto’ Visual effects and animation studio Animal Logic confirmed that Warner Bros.’ animated musical adaptation of Toto: The Dog-Gone Amazing Story of the Wizard of Oz will be the next project out of its Vancouver studio. The Sydney-headquartered company opened its Vancouver base in 2015, after forging a three-picture deal with Warner Bros. through which it would make three animated movies, starting with The Lego Movie 2: The Second Part, in Canada. Toto, the third movie in the deal, is an adaptation of the children’s book by author Michael Morpurgo and illustrator Emma Chichester Clark. Alex Timbers is attached to direct, from a screenplay by John August. Derek Frey will produce the animated movie, which according to Animal Logic is in preproduction. 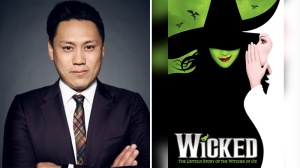 In the Heights Director Jon M. Chu Tapped to Helm Wicked Movie
Crazy Rich Asians and In the Heights film director Jon M. Chu has been tapped to helm the film version of the smash-hit Broadway musical Wicked. As previously reported, Stephen Daldry, who had long been on board for the film, will no longer direct due to scheduling conflicts. As previously announced, the movie was taken off of Universal’s release schedule due to the coronavirus pandemic, and a new release date has yet to be determined. Stephen Schwartz has revealed the movie will contain at least three new numbers. The composer also plans to incorporate at least one song cut from the Broadway show into the film adaptation. Both Schwartz and the show’s librettist Winnie Holzman are collaborating on the screenplay. No word yet on casting.