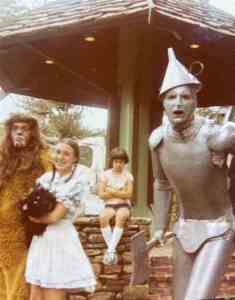 Stahl fondly recalls her summers in the Land of Oz For five memorable summers during the 1970s, Janet Oaks Stahl worked alongside a Tin Man, a Scarecrow and a Cowardly Lion. It was a summer job that Stahl, who is now a pharmaceutical sales representative living in Johnson City with her husband, Assistant City Manager Charlie Stahl, recalled recently on social media to mark the 50th anniversary of the grand opening of the now-closed Land of Oz theme park in Beech Mountain, North Carolina. “I was 13 years old when I started, and I was paid in cash,” Stahl said. “My mother worked as a cook in food services, and I was a farm hand at Dorothy’s house. I was there to to feed the pigs, goats and bunnies at the petting zoo, and to make sure no one got too close to the animals.” Stahl said she soon graduated to food services, where she served coffee and sausage biscuits in Auntie Em’s Kitchen. In later summers, she worked in the retail shops at the Emerald City, and was often cast as a dancing mushroom in one of the theme park’s musical productions. Stahl said she got to know some of the actors who were hired to portray Dorothy, the Wicked Witch of the West and other characters in the Land of Oz. Many were theater majors from Tennessee, Kentucky, Virginia and Florida. “They arrived to the park in the third week of June and worked until the third week of August,” Stahl said. “The actors were young, and there were multiple people — at least three — playing Dorothy and the other characters.” She also remembers the park’s last show of the 1977 season, which was just three years before financial troubles forced its corporate owners to close the gates to the Land of Oz. On that day in August, the actor playing Professor Marvel interrupted the show to announce on the park’s loud speaker that Elvis Presley, “the King of Rock and Roll,” had died. “Everyone cried,” Stahl said. “People just walked out of the park. All the wrap parties for that season were canceled.”

Nadine Garner on seeing The Wizard Of Oz in 1976 Actor Nadine Garner remembers her first trip to The Forum Theatre in 1976, coming in from the far reaches of the eastern suburbs on the train … “in my patent best and only leather buckle shoes and woollen stockings.” Watching Judy Garland, the wicked witch of the west and all the other wonderful Wizard Of Oz characters made Nadine realise she was “part of something big, terrifying and ultimately timeless.” Nadine is one of Australia’s most loved actors, in the theatre and on screen … and is a regular on ABC Radio Melbourne.

‘Oz’ book is back Crews re-installed the large floral sculpture of L. Frank Baum’s “The Wonderful Wizard of Oz” in Centennial Park on Friday, June 12. The living sculpture recreates the original cover of the classic novel with thousands of plantings. The sculpture made its debut in the park last June but was removed and stored in the city greenhouse for the winter. Paired with a yellow brick road and the Oz sculpture exhibit across the street at Herrick District Library, the exhibits make up the Holland Oz Project, a collaboration between the Holland Area Convention and Visitors Bureau, the library, Holland in Bloom and the city of Holland. A statue of the Wicked Witch of the West also joined the cast of characters from “The Wonderful Wizard of Oz” in the exhibit outside the library on Friday. The witch was installed alongside the Scarecrow, the Tin Man, the Cowardly Lion, Dorothy, Toto, a Munchkin, a Flying Monkey and a Fighting Tree. All of the bronze character statues were made by Brodin Studios and transported from Kimball, Minnesota to Holland to be installed.

Brookfield launches townwide read online Residents will be traveling down the virtual yellow brick road as the library moves its third annual One Town, One Read online. The townwide read is meant to strengthen community spirit with everyone reading the same book and then participating in different activities together. This year’s book is “The Wonderful Wizard of Oz” by L. Frank Baum. “The objective of the One Town, One Read program is always to spark enthusiasm for reading together, as a community, and to inspire thoughtful discussion,” Library Director Yvonne Cech said. Activities will run throughout June and July. They include teen writing sessions, children’s crafts, learning to use movie making apps, coding, book discussions and a townwide scavenger hunt that encourages people to visit local businesses. Guest readers will read selections from the book on Mondays and offer scavenger hunt clues to find the seven characters hidden around Brookfield. A map, more details and a full list of events is available on the library’s website and social media accounts. The activities culminate with a livestream presentation on July 23 of “The Saga of the Ruby Slippers.” It will be presented by Ryan Lintelman, the curator of the entertainment collection at the National Museum of American History, Smithsonian Institution, where the ruby slippers from the movie are housed.

8 manga artists will illustrate the covers of some classic children’s novels The summer children’s book fair “Kimi wa Mada, Meisaku no Omoshirosa wo Shiranai / You Still Donn’t Know How Interesting the Classics Are) has published new editions of eight classic novels dedicated to a child target, with covers made by acclaimed artists of the manga industry. These special editions will be available for sale during the fair, which will be held in mid-June. Those who buy one will have the opportunity to win, through a lottery, an exclusive bag illustrated with the cover of the book. There will be 50 bags up for grabs, each featuring a cover illustration. The Polar publisher will also organize a contest on Twitter – from 17 to 25 June – to give away another 64 free bags.

Posted in Oz in Print 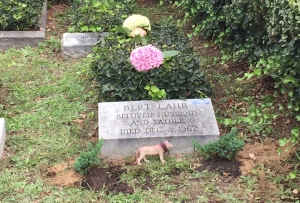 Her Father, The Cowardly Lion: Bert Lahr’s Daughter Shares Her Memories of ‘The Wizard of Oz’ Star “His gravesite is supposed to have perpetual care,” Jane says in an exclusive interview. “Well, I don’t know what they mean by perpetual care, but as we got there we saw there wasn’t a lot of it being done. But on his stone, a child had left a toy lion, and that speaks to me of Dad. We fixed up the gravesite, I planted a plant and we moved the little toy lion right up front and left everything in good shape. But that’s when I really think of Dad; the thought of that child leaving that lion. I can see a mother with a little boy, saying, ‘Oh, this is the lion in The Wizard of Oz’ and the toy is left in tribute. It’s so sweet. 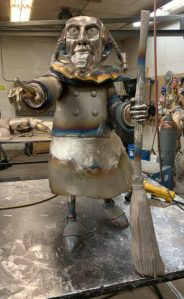 Floral book sculpture to return in June with new statue  The centerpiece of the Holland Oz Project will return this month. The 10- by 12-foot floral book sculpture bearing the cover of the original “Wonderful Wizard of Oz” by L. Frank Baum will be installed on Friday, June 12, along the yellow brick road in Centennial Park. The project was the brainchild of Allison Jesky, Hope College horticulturist, who first saw mosaic sculptures in 2018 while accepting an award for Holland in Bloom in Canada. Her idea, paired with Holland’s unique to the author of “The Wonderful Wizard of Oz,” bore the Holland Oz Project. Local lore rumors the book was penned in part while Baum vacationed at his cottage in neighboring Macatawa. Character statues have been installed on Herrick District Library property and linked to the flower sculpture with a yellow brick road, including the Scarecrow, a Munchkin, the Tin Man, Dorothy, Toto, a Fighting Tree, a Flying Monkey and the Cowardly Lion. The Wicked Witch will join the cast when the sculpture is reinstalled for the season. Also returning is the brick campaign. Fans of the exhibit will be able to purchase a personalized brick that will be placed along the yellow brick road. To purchase a personalized brick along the yellow brick road, or for more information, visit HollandOzProject.com.