Review Fix Exclusive: Inside ‘Toto Talks’ In “True Hollywood Story” style, Randall David Cook brings us the behind the scenes life and times of Toto … no not 80s rock band … the DOG from the Wizard of OZ.  We meet Toto … ready to spill the tea on all the goings-on when the cameras were off in OZ.  Angry that Judy got movies and the witches are STILL on Broadway, she’s ready to make this downtown appearance a chance to set the record straight … that’s right Toto is a SHE! If you’re friend of Dorothy, you’ll LOVE Toto. That goes for hypersensitive theater critics and dog lovers as well! This uproarious 60-minute soiree with the celebratory pooch features a triumvirate of talent. Stage and film professional, Joey McKneely, joins forces again with Cook after a triumphant run with the new musical Shadows, whose run at the Connolly Theater garnered high praise and full houses. McKneely is a two-time Tony-nominated Broadway Choreographer (Smokey Joe’s Cafe and The Life) and the international Director and Choreographer of West Side Story. Other Broadway credentials include Twelfth Night, The Wild Party, The Boy From OZ and the West Side Story revival.

Collecting ‘The Wizard of Oz’ and 80 years of history We know the movie was, and continues to be, a classic. In honor of its anniversary we went to Camden, where the owner of the world’s largest collection of Wizard of Oz memorabilia lives. Willard Carroll started collecting when he first saw the film on television at four-years-old… he was hooked. “There’s a genius to the way the movie is constructed, in which you have a little girl played by Judy Garland who plays everything in the movie totally straight and totally real and totally pure, just like a real kid and everybody else is nuts,” says Carroll. “Everybody else is this group of eccentric characters that she accepts on face value, she’s totally non-judgmental… I think that feeling of intense friendship gives it a universality that people have always responded to.” Carroll started collecting as a child, “[Proctor Gamble] did a set of these little plastic hand puppets and the bodies were generic but they were these molded plastic heads… you could send away for a puppet theater on the back of Ivory Snow boxes. So my mother bought a lot of Ivory soap that she probably didn’t need so I could get the puppet theater, so those were the first things.”

Legendary to Develop Series Set in L. Frank Baum’s Oz Universe From ‘Now You See Me’ Writer The untitled series hails from Ed Ricourt, who will write and produce. The series will examine stories and characters in Oz that haven’t been previously explored. When the return of a long-exiled Witch brings fear, division and war to Oz, the only hope is a servant girl who may become the most powerful and dangerous woman in the land. Dmitri M. Johnson & Stephan Bugaj of dj2 Entertainment will executive produce. Legendary is said to be near a deal for a director on the project. “I’m thrilled to partner with Legendary TV and dj2 to adapt my take on Baum’s rich, complex OZ book series which has influenced me creatively since childhood,” said Ricourt. Ricourt previously co-wrote the story and screenplay for the hit 2013 film “Now You See Me,” with the sequel premiering in 2016. His other credits include “Wayward Pines” and “Jessica Jones.” His feature script, “Year 12,” was featured on the 2009 Black List. Ricourt is also a writer and producer on the upcoming Netflix series “Raising Dion” and worked on the upcoming reboot of “The Twilight Zone” at CBS All Access. 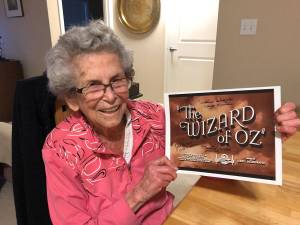 Mercer Islander recalls filming “The Wizard of Oz” A retirement community in Mercer Island will be celebrating the special connection of one of its residents with one of the most beloved movies of all time, “The Wizard of Oz.” The adaptation of L. Frank Baum’s 1900 children’s book “The Wonderful Wizard of Oz” came out in 1939, meaning that it is 80 years old. Meredythe Glass, who lives in Covenant Shores on Mercer Island, was an extra in the film, in the Emerald City scenes. She is now 98. “I was a green lady. There must have been a hundred of us,” she said. Glass may be the only surviving person involved in the film since Jerry Maren, the last munchkin, died in 2018. “People tell me that I’m the last of the cast, but I don’t have any proof of that,” Glass said.  She got the part because her mother’s first cousin, Mervyn LeRoy, was the director-producer of the film. When she turned 18, LeRoy got her a Screen Actor’s Guild card. “I didn’t want to be an actress. I wanted to go to college,” she said, but she graduated from high school during the Depression, and took the work she could get. She was paid $16 a day to work on “The Wizard of Oz,” which was “a fortune, in those days.” Glass went on to work in Hollywood for a few more years, mostly as an extra or stand-in. She secured a small contract with MGM (Metro Goldwyn Mayer) studio, appearing as an extra in several Judy Garland and Mickey Rooney films, including “Babes on Broadway,” “Strike up the Band,” and “Babes in Arms.”

From his Virginia Beach hideaway, scriptwriter told salty tales about “Wizard of Oz” Noel Langley, lead scriptwriter for the 1939 movie, sat for a Pilot interview while he was living in Virginia Beach in the 1970s, drawn there by his interest in Edgar Cayce and the Oceanfront enlightenment center. During his four years in Sandbridge, Langley wrote a book on Cayce, then quietly moved on. He had worked on “Oz” in his mid-20s, and had become jaded about Hollywood, though he was still being sought for work. He had a special contempt for movie mogul Louis B. Mayer. “He wanted that damned little dog, Toto, to talk, and even to sing. And for me to write lines for it. I said ‘No.’ Fantasy and whimsy is one thing, but a talking dog is another. I told them that the only way this would be a success was if adults liked it, too – and it didn’t talk down to children. He fired me. “But then, the next day he hired me back. Every time Louis B. Mayer smiled at me it felt as if a snake was crawling across my face.”

‘Finding Dorothy’ Pulls Back The Curtain On ‘The Wizard of Oz’ It’s been 80 years since Dorothy, Toto and the cast of “The Wizard of Oz” hit the big screen. Now, in a new novel, New York Times best-selling author Elizabeth Letts, writes about the real American family that inspired the classic book and film. “Finding Dorothy” is a story about love, loss, inspiration and perseverance. Letts will be speaking and signing copies of her book Wednesday at Warwick’s in La Jolla. She joins Midday Edition Tuesday to talk about the creators of one of America’s best-known stories.

Posted in Oz in Print 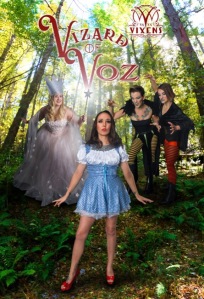 The Vixens are heading to Oz for a string of Valentine shows  Since the Louisville burlesque group Va Va Vixens has been together, way back in 2009, attempting a rendition of “The Wizard of Oz” has been somewhat of a Bucket List goal. Now that their home base has come together and their talented crew is at the top of their game, it’s time to jump into the world of “Va Va Vizard of Voz,” which opens Friday, Feb. 8, at Art Sanctuary and continues through Valentine’s Day weekend. Of course, this is the Vixens’ own take on the classic story, so it’s best if you go in with an open mind. “A few things you will notice is that we actually have two evil witches instead of just one ‘wicked witch,’ and our Dorothy is from Kentucky, and we will be visiting ‘VixenLand,’ explains Vixens manager and producer Lisa Frye. “There are many more surprises. We have also updated a few themes and crafted the story to bring it more into modern times.” The two-and-a-half-hour show will feature 20 performers including singers, dancers, aerialists, a guitarist and more. “Va Va Vizard of Voz” runs Feb. 8-9 and Feb. 14-16 at Art Sanctuary, 1433 S. Shelby St. Lousiville, KY. The show starts at 8 p.m. each night, with doors opening at 7. Admission is $30, or $40 for VIP, which includes table service. 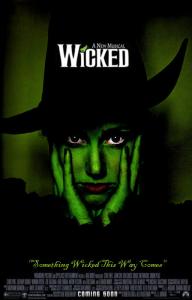 ‘Wicked’ Movie Gets 2021 Holiday Season Release Date Universal Pictures has set its “Wicked” movie for the Christmas season with a release date of Dec. 22, 2021. Stephen Daldry will direct and Marc Platt will produce. The three-time Tony Award-winning stage musical was adapted from Gregory Maguire’s novel by Winnie Holzman and three-time Oscar-winning composer/lyricist Stephen Schwartz, who are also collaborating on the screenplay adaptation. “Wicked” was produced on Broadway by Platt, Universal Stage Productions, the Araca Group, Jon B. Platt, and David Stone. The movie version will open five days after Fox launches its “Avatar 3” along with an untitled Disney live-action movie, and an untitled Warner Bros. animated feature. Universal had original slated “Wicked” to open during the 2019 holidays but decided instead to go with “Cats,” the big-screen adaptation of Andrew Lloyd Webber’s smash musical, on Dec. 20, 2019. The film adaptation of 2003’s “Wicked” is expected to include two new songs. Cast members have not yet been announced.

17 Secret Moments to Watch For in The Wizard of Oz Playbill spoke with John Fricke, the preeminent Wizard of Oz historian and author of seven books on both Oz and its star—Judy Garland, to glean an expert take on the film. Here, Fricke shares 17 moments that fans should watch for on the big screen, and dispels one grand myth surrounding The Wizard of Oz.

Massive Oz collection to go on show for seniors week Dorothy Overton never liked her name. But falling in love with The Wizard of Oz changed all that. Now Ms Overton is regarded as Australia’s biggest collector of Wizard of Ozmemorabilia – and you can check out some of her most prized possessions this month. The 75-year-old will display items like teapots, dolls, plates and more for seniors week. “I’ve picked up things from across Australia and overseas,” Ms Overton said. Ms Overton’s memorabilia will be displayed at the Funland for seniors week from Tuesday, February 19 to Friday, February 22, 9am-2pm daily. 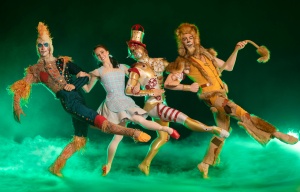 How Three Ballet Companies Joined Forces to Bring The Magical World of “The Wizard of Oz” to Life On Friday, Colorado Ballet will present the company premiere of Septime Webre‘s The Wizard of Oz, a ballet they produced jointly with Kansas City Ballet and Royal Winnipeg Ballet (KCB presented the world premiere back in October, and RWB will have their turn this May). The three companies split the costs of creating the full-length story ballet, which includes an original score by Matthew Pierce; 120 colorful costumes (plus 112 hats!) designed by Liz Vandal; projection technology and flying effects; and puppetry (including a puppet Toto) by Nicholas Mahon, who recently worked on the opening ceremony for the 2018 Winter Olympics. The result is a major new production none of the companies likely would have been able to pull off on their own.