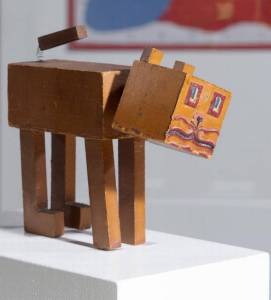 Dorothy in a leisure suit? KC’s Toys and Miniatures museum explores the world of Oz The folks at Kansas City’s National Museum of Toys and Miniatures want you to ease on down the road to their renovated digs and get to know “Oz” in a new way. “Wizard of Oz” collectors from around the country have donated costumes, replica ruby slippers, soaps, party masks, valentines, clothing hangers — an entire exhibit’s worth of eye candy for “Oz” fans. And of course there are “Oz” dolls and hand puppets and play sets and other toys because — well, it’s a toy museum.“ Because our focus is on toys or miniatures, we decided that we wanted to look at the way that this novel influenced toy production,” said Laura Taylor, the museum’s curator of interpretation. “And so, although not everything we have in the exhibit is toy-related, we wanted to include things that kind of fleshed it out and gave people a bigger story.” “Over the Rainbow: Toys From the Land of Oz,” opening Saturday, is a kid-in-a-candy-store treat for fans of the “Oz” story in all its iterations. Halloween costumes based on “The Wiz,” for instance, were rare because of the red tape involved with anything having to do with Michael Jackson, who played the Scarecrow in the 1978 movie musical. But one of those “Wiz” Halloween costumes has found its way here. We hear that one museum staff member, a fan of the 1985 Disney fantasy-adventure “Return to Oz,” nearly fainted when the stunning Princess Mombi costume from the movie arrived. Most of the items displayed belong to Kansas City’s own “Oz” superfan, Jane Albright, who asked about 20 fellow members of the International Oz Club to loan one-of-a-kind pieces from their private collections. (By “superfan,” we mean a woman who moved into a bigger home two doors away so she could pull her overflow memorabilia out from closets and under beds and display everything properly — on the entire third floor.)

New Lucas Museum to Feature ‘Star Wars,’ ‘Wizard of Oz’ Memorabilia George Lucas has finally found a home for the planned $1 billion Lucas Museum of Narrative Art. The museum board of directors recently announced that Los Angeles was selected — over San Francisco — to house the planned museum. The Lucas museum will be built in Exposition Park, near downtown Los Angeles. It will feature memorabilia from “Star Wars” and “The Wizard of Oz,” as well as fine art and popular art. It will include narrative paintings, comic art, illustration, photography and other media. Lucas’ own personal art collection — including works from Edgar Degas, Winslow Homer, Pierre-Auguste Renoir and Norman Rockwell — will also be featured. Lucas is financing the museum himself. He’s been working on the museum project for nearly a decade.

This entry was posted in Oz Events, Oz in Pop Culture. Bookmark the permalink.