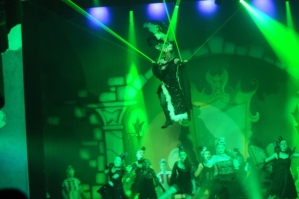 REVIEW: Wizard show takes you over the rainbow The arrival at the Emerald City was camp, glitzy and glamourous, and you’d expect nothing less from a dance number lead by the island’s very own stage star Gary Chatel who plays the Wizard. My own children loved the panto, they laughed a lot at the jokes and booed and hissed in the right places. The ‘Mastermind quiz’ scene with the Tin Man with the Emerald City Guard was a particular favourite. The Wicked Witch of the West, played by David Dawson was a cross between an evil witch and a glamourous drag queen, and he played the part of the ‘baddie’ extremely well. The flying monkeys were almost as scary as I remember from the original movie. There was great music throughout the show, with classic tunes merged with pop such as ‘Ease on down the road’ leading Dorothy to The Emerald City. They even incorporated tunes from other musicals like ‘Pure Imagination’ from ‘Charlie and the Chocolate Factory’ as well as updating more iconic songs such as ‘Somewhere over the Rainbow’.

This entry was posted in Oz Music, Oz Theatre. Bookmark the permalink.