‘The Wiz’ NBC’s Next Live Musical, With Cirque Du Soleil; Broadway Revival Planned  NBC’s next live television production will be an update of hit Broadway musical The Wiz, debuting December 3, but this time the network has partnered with Cirque du Soleil to co-produce the live event. It will then become a Broadway revival for the 2016-17 season.  The Wiz is adapted from The Wonderful Wizard of Oz by L. Frank Baum. Subsequently, Baum’s book was adapted as a stage musical with a book by William F. Brown, and music and lyrics by Charlie Smalls. The adaptation, which featured an all-black cast, debuted in October, 1974 at the Morris Mechanic Theatre in Baltimore. It moved to Broadway’s Majestic Theatre on January, 1975, where it ran for four years and won seven Tonys, including best musical.

“Over the Rainbow” Songwriter’s Great Grandson Journeys Back to Oz  “The Wizard of Oz was always just sort of background for me,” Aaron Harburg told SF Weekly. “I can’t even remember when I first learned it. It’s sort of like asking when you learned that 2 + 2 = 4. It’s just always there, a fun fact that was our little claim to fame.”  Harburg also explained the special appeal that Judy Garland, and musicals, have with gay men. “The film starts with a girl who feels out of place,” he observed. “Many gay men, myself included, are forced with a monotonous reminder of being different, or out of place in a heteronormative society.The desire to escape to a place of acceptance is very intense in gay men.” There were other reasons for Wizard‘s appeal to gay audiences. “Oz is fabulous!” exclaimed Harburg. “Why would you want to go home after going there? But I suppose that’s the point. Even if everything is all colorful and exciting, that doesn’t mean it’s fulfilling.”

Oz-Stravaganza! 2015 Guest Lineup  The 37th annual Oz-Stravaganza! festival will be held June 5th – 7th in the birthplace of L. Frank Baum – Chittenango NY. The International L. Frank Baum and All Things Oz Historical Foundation is proud to announce the fantastic 2015 Oz-Stravaganza! Festival guest list. This year marks the 37th annual Oz festival, and the organizers could not be more excited about the fantastic  guest lineup and free Oz programming being offered. The 2015 theme is Oz “ShowStoppers”, and we are celebrating the anniversaries of some very important milestones in the OZ universe.  Two-time Emmy Award winner and Grammy Award nominee John Fricke will once again be hosting the festival as well as the  stage shows featuring our guests both Friday and Saturday night.
Additionally, Munchkin by Marriage- Myrna Swensen will be available to meet fans and sign autographs.  In 1995, an author took a step back in the OZ timeline with a clever “what if” story about the witches we have grown to love. In the book “Wicked: The life and Times of The Wicked Witch of the West”, we are taken on a journey to what happened before Dorothy arrived in Oz. This year, in order to help celebrate the 20th anniversary of this book- Oz-Stravaganza! Is pleased to announce that Gregory Maguire will be a part of Oz-Stravaganza!.  30 years ago, Disney took a chance on a live action film featuring some great characters from Baum’s OZ books including the Nome King, Tik Tok, and even Jack Pumpkinhead. This year movie Critic, Director and Producer Ryan Jay will be joining us to share some of his new documentary on the film “Return to Oz”. In addition, making her OZ festival debut- Ozma herself, actress Emma Ridley will be at Oz-Stravaganza!  Additionally known for his work on the large and small screen, as well as Broadway. He voices the very popular character “Oogie Boogie” in “The Nightmare Before Christmas”, as well as portraying Max in the movie ‘Dreamgirls’, and originating roles on Broadway in Cats and Ain’t Misbehaving.  He also has played the Cowardly Lion in the stage production of “The Wizard of Oz” which starred Mickey Rooney as the Wizard, and Ertha Kit as the Wicked Witch of the west. For the first time at Oz-Stravaganza! – Celebrating the 40th anniversary of the Original Broadway engagement of “The Wiz” – the lion himself- Ken Page will serve as the 2015 parade grand marshal.  The 100th anniversary of Baum’s book “Scarecrow of Oz” will also be celebrated this year. To help with this part of the celebration, Christianna Rickard- author and niece of MGM’s Scarecrow- actor Ray Bolger will be on hand to share stories and memories of her uncle. Author’s and Illustrators Alley return again this year with several special guests including headliner- Roger Baum and his wife Charlene. Roger is L. Frank Baum’s Great Grandson, and has written many Oz books, including “Dorothy of Oz” which was made into the 2014 animated film “Legend of Oz: Dorothy’s Return”.
The Oz committee hopes you’ll make plans to attend Oz-Stravaganza! in the Syracuse NY suburb of Chittenango June 5th-7th, 2015.

Win THE SOUND OF OZ Memorabilia Including T-Shirt & Signed Book  Hotly anticipated new WIZARD OF OZ documentary THE SOUND OF OZ is currently in production and the filmmakers are extending a special offer exclusively to BroadwayWorld readers with a particular affection for all things Oz. Enter to win a “Somewhere Over The Rainbow” t-shirt as well as a signed copy of WIZARD OF OZ lyricist Yip Harburg‘s acclaimed biography WHO PUT THE RAINBOW IN THE WIZARD OF OZ? by Ernie Harburg and Harold Mayerson as part of a new THE SOUND OF OZ contest.

Michael Feinstein Takes Audience Over the Rainbow with Tribute to E.Y. ‘Yip’ Harburg at Carnegie Hall  Feinstein began the evening with a medley of Harburg songs reflecting the author’s talent and diversity. The artist completely reset himself for each number, yet maintained his educated reverence for the material. Arrangements were fastidious and unfussy spotlighting lyrics. We then heard signature songs of the Scarecrow, Tin Man and Lion with measured, lilting delivery and a light, last growl. Feinstein’s dropped ‘g’s seemed perfectly natural.

Sisters Fest 2015 celebrates the “Wizard of Oz”  Good witches, bad witches, munchkins, cowardly lions, tin men, scarecrows and Dorothy, Dorothy, Dorothy could be spotted all over Sistersville last weekend as the 15th annual Sisters Fest was held with the “Wizard of Oz” theme delighting one and all. Sisters and friends joined together for a fun-filled weekend with costume contests, a variety show, games, activities, and good old fashioned fun. Organizers say this year’s event was very well attended and released the date of next years event . . . March 18-19 with the theme, “Slumber Party”.

“Wicked” author among 5 speaking at UMD brunch  This year’s UMass Dartmouth Authors’ Brunch promises to be a wicked good time. Sorry. Couldn’t help that one. Yes, BookLovers, among the five authors — all of them awesome, by the way — speaking and signing at the Claire T. Carney Library Associates 9th Annual Authors’ Brunch Fundraiser is Gregory Maguire. The guy that pretty much started his own genre of rewriting childhood classics for adults.  “I grew up in the shadow of Vietnam; I spent my middle and high school years expecting to be drafted…In those final years, as Nixon holed up in the White House seeming mercurial, autocratic, and paranoid, and armies of young men were sent west to kill the Wicked Witch of the Viet-Cong, I think my earlier grade-school suspicion (kicked in): that the Wizard’s lying … was a graver moral ill than the Witch’s stormy grief over the death of her sister and the theft of…those shoes,” he said. “Hence ‘Wicked,’ in which the Wicked Witch of the West is a kind of conscientious objector and the Wizard is a despot.”   The cost for the fundraiser is $35. Checks for the brunch can be made out to the Claire T. Carney Library Associates. The deadline to reserve your tickets is Wednesday, March 25. Call Rita Raymond at (508) 995-3528 to reserve tickets or e-mail myoken@umassd.edu or visit umassd.edu for more information. UMass Dartmouth Woodland Commons is located at 285 Old Westport Road, North Dartmouth.

Minor league team plans Dorothy from ‘Wizard of Oz’ jerseys There’s no place like home plate. That’s exactly what the Jackson Generals of the Southern League are saying when they announce that their ballplayers will be made to wear jerseys themed after Dorothy from the The Wizard of Oz on a night celebrating the classic film. Yep, come May 15 at the Ballpark at Jackson (Tenn.), the Class AA affiliate of the Seattle Mariners will wear uniforms that make the players all look like Judy Garland impersonators. The players will be begging fans to pay no attention to the men beyond the grandstand.  As you can see from the schematics provided by the team, the jerseys are styled in the blue and white gingham pinafore dress Dorothy wore, along with with red ruby slipper accents and — AND, AND, AND — pigtails. Pigtails! (Well, pigtails are very softball, which is like baseball.) There’s also a jersey tag that includes renderings of Emerald City, the Yellow Brick Road and all of the parting gifts the Wizard gave to Scarecrow, the Tin Man, and the Cowardly Lion. (Although, some say that Oz never did give nothing to the Tin Man that he didn’t already have.) Oh, and there’s an image of Dorothy’s little dog, too. Toto.

Crosby artist Nancy Adams says her goal is to show adults and children that the lowly tin can does not have to be sent to the ever-growing number of landfills and that alternative art forms can be beautiful and comical, redefining their perception of what recycling and art can be in someone’s everyday life. 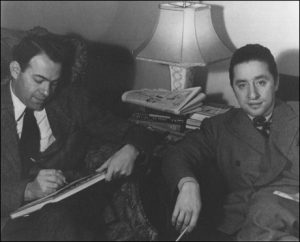 Composer Says He Hid Bits of “Wizard of Oz” in Score to Wicked  Stephen Schwartz, composer of Wicked, the musical prequel to “The Wizard of Oz,” reveals that he hid bits of the classic Harold Arlen/E.Y. “Yip” Harburg score in his original score for the hit Broadway musical. The revelation comes in the trailer to an upcoming documentary on Arlen and Harburg, “The Sound of Oz,” being assembled by Harburg’s great-grandson, Aaron Harburg. Among others, the younger Harburg is interviewing celebrities who have been associated with “Oz” in various ways, to show how the film has influenced world culture. Here is a trailer for the upcoming film. In it, Schwartz says he hid “Oz” passages in five places in Wicked and plays one example, starting at the 1:40 mark.

Wizard of Oz live radio play  In a time before television, before the Internet and long before podcasts, it was the radio that dominated in-home entertainment. Actors, singers and musicians broadcast over-the-top theatrics via the airwaves — along with fabulous advertisements and ancillary serial stories. L.A.’s Fake Radio crew of quirky characters has been re-creating these retro amazements for live audiences for years, with witty panache — and this time, you get to sing along. Their presentation of Lux Theater’s 1950 Wizard of Oz live radio play broadcast comes with lyric sheets in the unlikely event that you need them — but you’ll need to bring your own ruby slippers.

Nike Skateboarding Releases Wizard Of Oz-Themed Sneakers  Nike Skateboarding just released Wizard of Oz-themed sneakers, but It’ll take you more than a few heel-clicks to get these shoes. This new Nike SB Dunk Low features a blue and white gingham print reminiscent of Dorothy’s dress, while the red laces and accents give a nod to her ruby heels. The special insoles feature a yellow brick tile pattern, another obvious tribute to the legendary film. Buy them now at select Nike SB retailers like Oneness.